Samara Fine Arts is pleased to offer two lithographs by Pacific Northwest figurative artist William E. Elston, on the theme "Contemporary Games."  Two monochrome images on Arches Buff (100% rag French paper), 27 x 40 inches, hand pulled on the largest available stone at Stone Press in Seattle in 1987-88, in an edition of 100 signed and numbered. Please note that each print is a “bleed” print, which means that the image goes right up to the edge of the paper, with no margin.  About lithography. 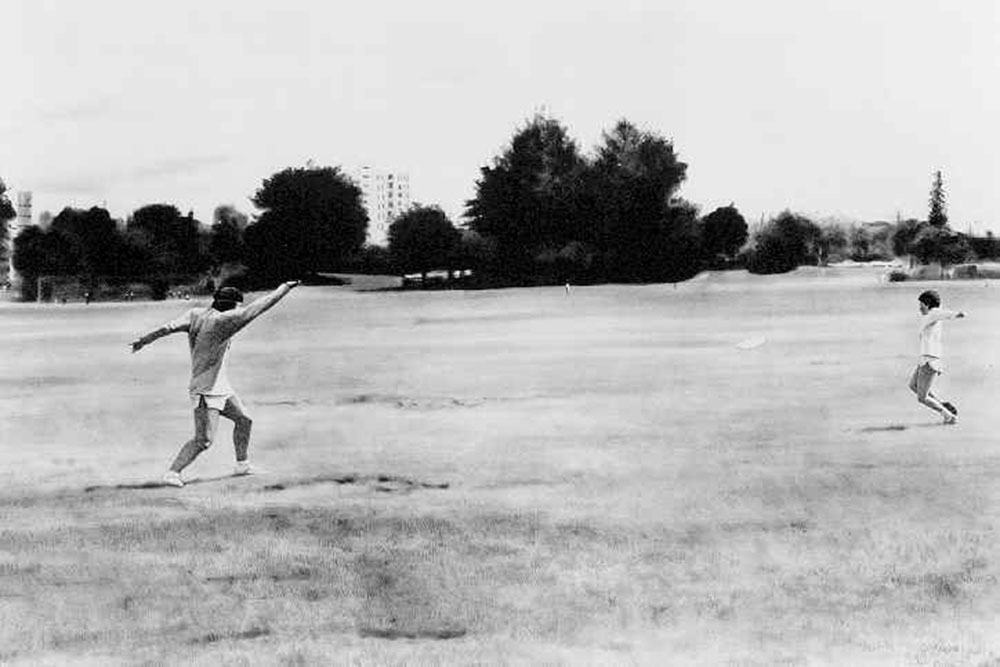 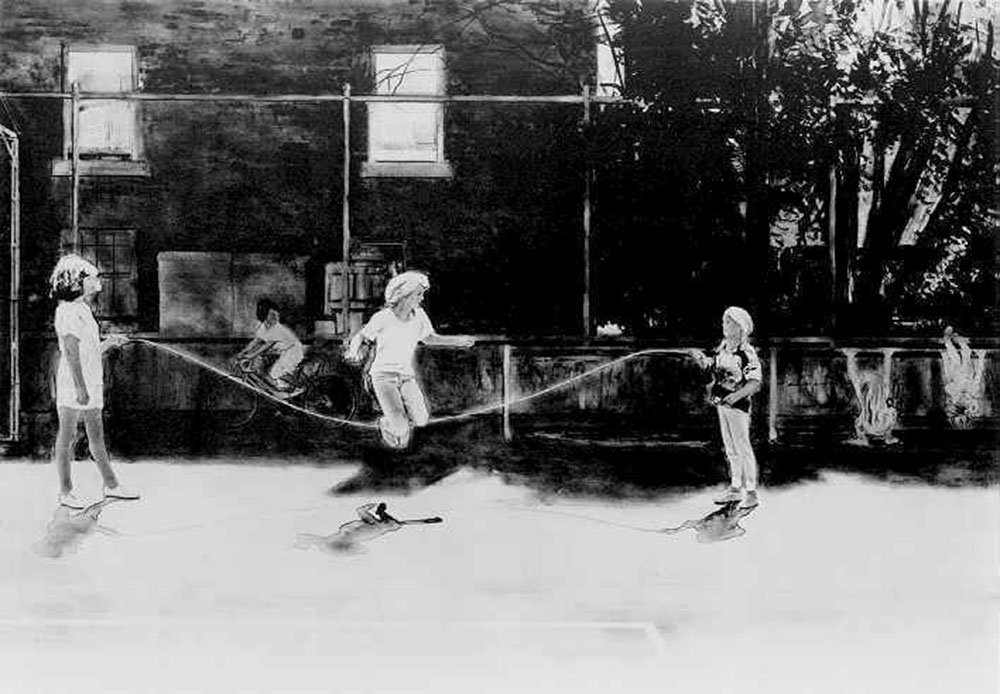 TWENTY-FOUR ROBBERS, lithograph on paper, edition of 100, 27 x 40 inches, copyright ©1988
These Prints are available for $500 each plus shipping and handling, and sales tax where required (State of Washington 8.6%).  Shipping, insurance and handling charges are approximately $30 each single print.

There is a 10% discount for the purchase of both prints. You can purchase via PayPal, either by PayPal account or credit card.
$500.00
You can also order with a credit card by phone or email:

The inventor of lithography, Aloys Senefelder, called his new process "Chemical Printing. "The term did not gain acceptance, but was actually more accurate than "lithography," the term that did, in that the principle upon which the process rests is that grease and water will not mix. Lithography (derived from the Greek words for "stone" and "writing") has nevertheless come to be used for all compositions made on this principle, whether printed from stone, zinc, or aluminum.

The lithographic process became widely used both commercially and artistically throughout Europe by the mid-1800s, replacing traditional etching and wood block printing processes. Books, posters, illustrations, music scores and checks were but a few of the common uses for this process. Lithographic printing shops employed large staffs of master craftsmen, printers and artists, and could be found in every major city in Europe and the United States by 1900.

As the lithographic process was automated, the use of hand-pulled prints from stone became rapidly obsolete. So much so, that by 1915, most printshops had jettisoned their stones and presses into land fills, lakes and oceans never to be reclaimed.

Through the United States, lithography languished into obscurity, only occasionally being utilized by artists in the 1940s and 50s. However, with the development of Pop art in the 1960s, lithography was widely re-accepted as a major and highly adaptable process for the creation of fine art limited editions. Lithographic printshops for the exclusive use of artists are now quite common.

Stone Press Editions, under the direction of the late master printer Kent Lovelace, was founded in Seattle in 1979. The shop printed high quality limited edition fine art lithographs for artists mostly from the West Coast and predominantly from the Northwest.Samara Fine Arts and the artist are grateful for the opportunity to have worked with a technician of such calibre.

The information above is excerpted from The Tamarind Book of Lithography: Art and Techniques by Caro Antreasian and Clinton Adams, and material provided by Stone Press.

William E. Elston was born on June 18, 1949 in Spirit Lake Idaho. He grew up in the rural area southeast of Spokane Washington called Glenrose Prairie. He attended high school in Spokane at the then newly built Joel E. Ferris High School. After leaving home at age 16 he traveled extensively, to San Francisco during the peak of the hippy era, then to Los Angeles, New York and Montreal, Quebec, where he finished high school studies at Baron Byng High School.

He returned to the Pacific Northwest and studied painting at Fort Wright College of the Holy Names in Spokane, and at California College of Arts and Crafts in Oakland. He earned a Bachelor of Fine Arts degree from Fort Wright in 1975. He spent a year teaching painting workshops at The Evergreen State College, and then spent several years studying privately in New York and Boston.

Mr. Elston has taught at Fort Wright College, The Spokane Art School, The Academy for Realist Art (now The Gage Academy), the Frye Art Museum, the Seattle Art Museum, and has been a guest lecturer at Marymount Manhattan College in New York, Whitworth College in Spokane, Eastern Washington University in Cheney, the University of Washington in Seattle, and The Gage Academy. He continues to teach ongoing plein air classes and workshops in Seattle and surrounding areas.

Mr. Elston was an original founding member of the Northwest Figurative Artists' Alliance, an organization that presented lectures and symposia on issues related to figurative art and Realism, sponsored ongoing roundtable discussions and periodic meetings amongst artists, published a bi-monthly journal of art criticism and review, networked with figurative artists worldwide and actively worked to promote the concerns of Realism and figuration. At its peak the organization had over 60 members. The Northwest Figurative Artists' Alliance was revived in 2010, primarily as a website that featured members' works and show announcements. It was disbanded in 2018.

William E. Elston's work has been widely collected in the United States and in Europe, and is included in many public, private and corporate collections. These include Jundt Art Museum at Gonzaga University, Microsoft, Hewlett Packard, McGraw Hill, American Express, Ashforth Pacific, Miller Nash LLP, Swedish Hospital in Seattle, University Hospital, Evergreen Hospital, Bill and Melinda Gates, the City of Seattle and the City of Portland.

I grew up between small town life, rural farmlands and the city. I've never been completely happy in one environment or the other, but I do find some joy when I explore the relationships between the three. My earliest experiences making art were varied, constructing alligators from paper, scotch tape and kleenex, drawing giants and detectives, and other kid stuff.

I don't think I've ever grown out of that world of make believe. I began drawing and painting landscapes in high school, often sitting in the woods with charcoal and paper trying to mimic the rhythms of light and shadow, growth and decay. On a trip to Victoria BC I sketched the Empress Hotel, using colored chalk and turpentine washes. Architecture was and is a fascination, but more as a reflection of human intention rather than as feats of engineering.

My boyhood interest in puppets and marionettes found echoes in the shallow theatrical space of the street, where freeform improvisational dramas take place all the time. Humans are always engaged in social display, consciously or not. I love literature where the street's chance meetings drive the plot forward, like in the novels of Dickens, Galdós or Zola. I also like travelogues that describe the fragile tapestries of life and land, like Ma Jian's Red Dust.

I've spent a life painting, often against the grain, and I'm happy to see young people taking up the brush and engaging in very careful looking. Even a static scene can only reveal its riches with the tribute of concentration. I've often thought about the purpose of art, as one also questions the purpose of life. I fall back on Robert Henri's statement, which I can only paraphrase because it's been so long since I first read it: "Art is how men speak to each other across the centuries."